The mayor of Begoua, the suburb where the shooting took place, said at least 100 people were injured.

One local journalist told the BBC the Chadians had been attacked by a Christian militia.

The country has been hit by civil conflict since Seleka rebels ousted President Francois Bozize in March 2013.

The Chadian forces were not part of the official African Union peacekeeping force and were there to help Chadian nationals leave the country, the BBC’s Thomas Fessy says.

Chadian troops have been accused of supporting the rebels, who are mostly Muslims.

Dozens of people were seriously injured in the incident, local authorities said.

Despite the deployment of some 6,000 African Union and 2,000 French troops in the country, violence has continued unabated.

On Friday a grenade attack on a funeral in Bangui was reported to have killed 11 people.

The conflict has taken on an increasingly sectarian nature, with UN human rights chief Navi Pillay warning last week that hatred between Christians and Muslims in CAR had reached a “terrifying level”.

There have been horrific attacks, including acts of cannibalism and children’s heads being cut off.

Around a quarter of the country’s 4.6 million people have fled their homes.

After the Seleka deposed President Bozize and installed their leader, Michel Djotodia, as president, they were accused of targeting Christians.

In January, Mr Djotodia was in turn forced to step down amid criticism he had not done enough to stem sectarian violence. 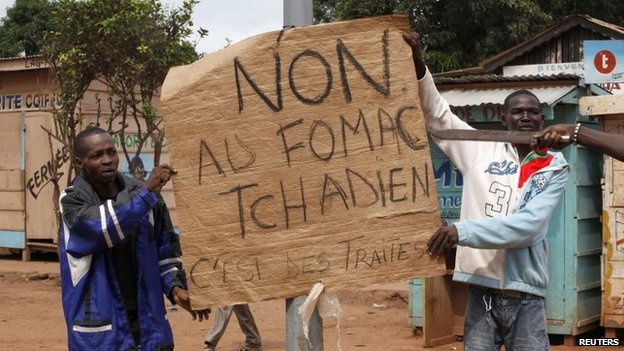 Some Central Africans have accused Chad of supporting the Seleka rebels

Since then, Muslims have been singled out for attack, with thousands fleeing their homes, many to neighbouring countries such as Cameroon and Chad.